Teacher of the Week: Yona Smith 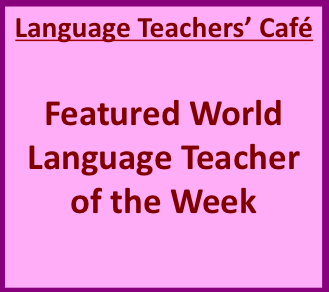 Teaching History:
I taught high school Spanish level 1 and 2 for 16 years before moving on to teach SPN101 and SPN102 at the college level where I currently work.

Favorite Thing about Teaching Spanish:
My favorite thing about language teaching is watching students go from having absolutely no knowledge in the language to having a mini conversation or writing a composition. It is such a joy to see their pride of accomplishment and sometimes even surprise at their abilities!

Favorite Lesson:
I used to hate teaching the preterite and imperfect until I developed some visual resources that really help to re-enforce the differences between the two. Now I actually look forward to teaching these two tenses because the students understand it so much better! I introduce the overall idea of the two tenses using an animated presentation that I created showing the difference: preterite is like a movie and each action leads to the next whereas the imperfect is like a photograph and the verbs describe the scene. I also developed picture notes listing the contrasting reasons side by side such as preterite - completed action vs. imperfect - ongoing action. I find that pictures and visuals really make all the difference in the world!

One Tip to Spanish Teachers:
I am a supporter and proponent of immersion classes and keeping as much as you can in the target language, but sometimes we need to let the English help! A perfect example of this is when you are contrasting the preterite and imperfect tenses. I use a 'test' to practice with my students in English. I tell them that if they are having a hard time deciding on which tense to use that they should 'test' it. For example: I went to the store every day looks like the preterite on the surface level (went); however it is really imperfect! Why? It failed the test! Here's the test: Can you substitute was _____ing, would _____, or used to ______???? Yes! You could say, I would go/I used to go to the store every day! That tells you that it is the imperfect tense in this sentence! This works great when you are having your students translate as well as when they are trying to write on their own!

This is an easy way to keep the preterite and imperfect straight! Let the students SEE the difference with pictures! 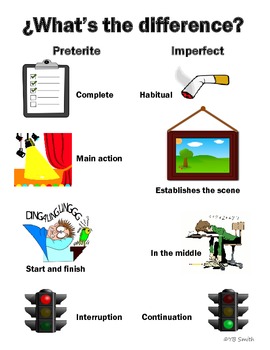 Email ThisBlogThis!Share to TwitterShare to FacebookShare to Pinterest
Labels: Spanish, Teacher of the Week