Why study a foreign language

I like to start out my semester answering head on in a positive way the very question that many students negatively bring with them to the foreign language classroom.

Why do I have to study a foreign language anyway??? 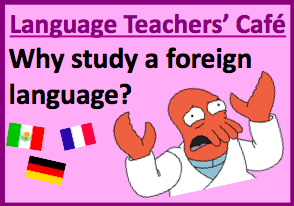 I hope that you not only find this interesting yourself, but that perhaps it may enable your students to see the benefits of what we already know to be true concerning knowledge of a second language!

Here's how it goes: So you’re in a foreign language class… now what? Believe it or not (sarcasm implied) many students have no interest in taking a foreign language and resent being forced to take the class for a general education requirement. However, foreign language is not the ONLY class they are obligated to take! So why does this complaint seem to be a recurrent theme among these students? They bemoan the obligation to fulfill a foreign language requirement and yet say nothing regarding some of the other required gen. ed. courses? Maybe this is because in general people have a fear of the unknown. But is learning a language really the ‘unknown’? What I mean is we all had learned our native language pretty fluently by the time we were 3 years old! We’ve all done it before, so learning another language should be like riding the proverbial bike, right? Exactly! So, let’s get back on that bike and learn Spanish!

Ok, but ‘why?’ you ask. Let’s take a look at some of the benefits of learning a second language! Obviously, there must be reasons that most universities require foreign language courses. (Most schools require that students take at least 2 years of the same foreign language to be admitted, and there are more stringent requirements for the more prestigious schools.)


2. There is a correlation between second language learning and the knowledge of English structure and vocabulary (Curtain & Dahlberg, 2004). Learning a second language helps you to understand your native language structure better and increases the scope of your vocabulary! In fact, students of foreign language consistently score higher on tests of English vocabulary, especially when the language being studied has Latin roots. (Masciantonio 1977)


3. Learning a second language correlates with a more positive attitude toward the culture related to the language. It enables you to have a global awareness and a unique insight into that culture as well as view your own language and culture from a unique perspective.
Language is a means of unification and relationship building with a diverse, global community. How can communication, negotiation, and understanding occur if we can’t understand each other?


4. Many North Americans have the misguided assumption that most people globally can communicate in English. However, according to the CIA World Factbook, only 5.6 percent of the world’s population speaks English as a primary language. Therefore, North Americans knowing more than one language have a definite edge over their competition in the global workforce, especially as technology brings us all closer together. In many countries it is required to learn not just a second language, but sometimes a third. Yet, some areas of the United States allow students to graduate from high school without credits in a foreign language. Additionally, only about 9% of the population in the U.S. is multilingual compared to 52.7 % in Europe. (World Languages and Cultures).

Please see the following links for more information on the research behind these facts:

This post written by:
Yb Smith
http://www.spanishresourceshop.com/
Posted by SpanishPlans at 1:35 PM

Email ThisBlogThis!Share to TwitterShare to FacebookShare to Pinterest
Labels: Any Language, back to school, guest blog